Region of the North Aegean 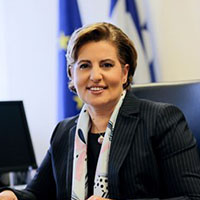 She was born in 1964. From when she was a student at the University, as she is sensitive to the various problems of our society, she has been involved with the political issues.

She has been developed intensive political activity.

In 2004 she has been elected as a member of the Parliament of the Perfecture of Lesvos.

With her proposal regarding the policy of the islands as an integral part of regional development policies, in 2005, she has been uniformly recognized from the whole body of the Parliament.

She recommended the constitutional recognition of special care (article 101) on special condition of the islands.

In 2012 she is placed in the position of General Secretary of the Aegean Decentralized Management.

At the same time, she is brought into action and is participated in civil initiatives like conferences and events for sustainable development issues, in entrepreneurship, protection of the environment. In addition she dealt with issues related to the contemporary women.

For more than 20 years she has been working in the private sections in liable positions, as an executive manager and business consultant in the sectors of organization, development and economic management of major projects.

She has elaborated significant reports and scientific proposals in the financial sector and regional management.

Today, she is a Governor of the North Aegean.